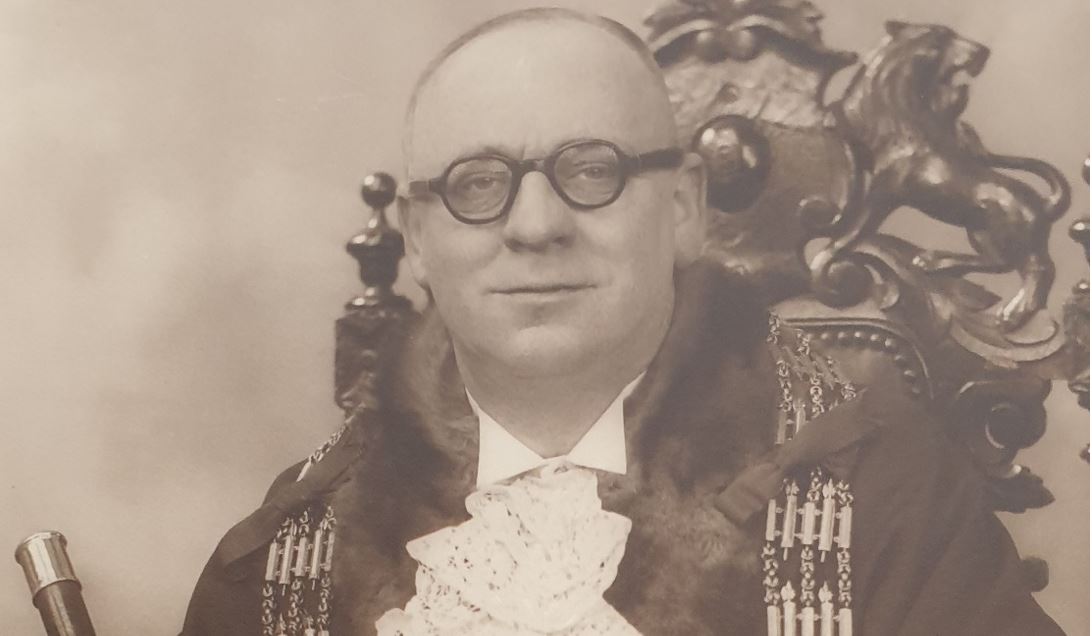 Late on 7 May, 1945 the BBC interrupted its scheduled broadcasting to report the war in Europe had ended and that the following day, 8 May would be a national holiday.

It would be called Victory in Europe day, or VE Day as it became known.

Around the country many people couldn’t and didn’t wait for the following day to celebrate and spontaneous festivities began soon after the announcement with thousands of people taking to the streets in London and many other cities across the nation.

Celebrations continued into VE Day itself. In the afternoon Prime Minister Winston Churchill broadcast a speech to the nation and also appeared, to the surprise of the crowd, on the Ministry of Health balcony where he again made an address. He later then joined the Royal Family on the balcony at Buckingham Palace.

In Lincoln, following the address by the Prime Minister, the Mayor Councilor Harold Bennett (pictured) made a formal announcement of the end of the war from the Guildhall to a crowd of thousands in the streets below.

At 9pm the King was to address the nation, and thousands of people were present on the South Common to hear his words and to see the Mayor, Councillor Harold Bennett light the City’s huge bonfire in celebration of the occasion.

The bonfire stood to a height of 25 feet, and soon after lighting the fresh breeze resulted in the bonfire being visible for miles around, at midnight the bonfire on the Common was still ablaze.

Service men and women and members of the public paraded the streets between the Guildhall and the Lincoln Midland Station following the King’s address, many singing in groups and dancing.

The Stonebow with the Guildhall above had always been a place where people gathered at times of celebration within the City, the site had been the focal point of the city administration since the year 1237, so it was no surprise that it again became a symbol of togetherness for its citizens.

Scenes outside the Guildhall during the formal announcement of the end of the war in Europe by the Mayor, Councillor Harold Bennett. Photo from the Lincolnshire Echo, 10 May 1945.

From 10 pm until the early hours of the 9 May the celebrations continued. Searchlights located at Thornbridge and at the Ritz on the High Street joined two others located uphill in illuminating and dancing across the towers of the cathedral.

The search lights were eventually turned off at 1 o’clock and when the Illuminated VE sign which had been erected on the South face of the Guildhall was turned off 30 minutes later, the crowds started to disperse, but only until the following evening when even larger crowds danced into the early hours of the following day to gramophone records amplified from speakers outside the Stonebow.

Today it is a different picture outside the Stonebow, the streets are empty and the Guildhall blinds closed during this period of restrictions.

The council’s events planned to remember the end of the war in Europe have been put on hold for now, but with just an ounce of the perseverance shown by the citizens of this city 75 years ago we will be in a position to celebrate again soon.