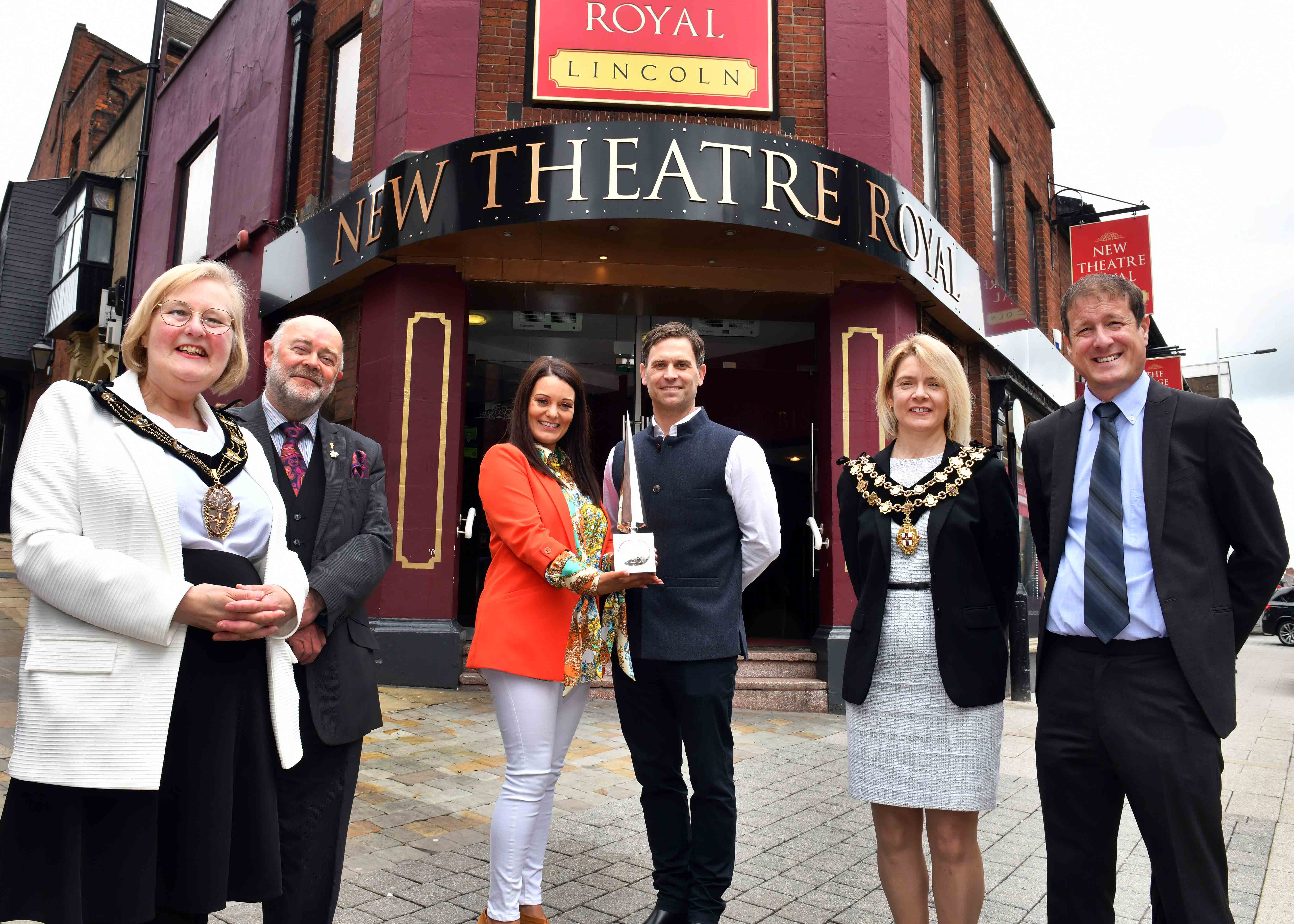 Double celebrations were the order of the day – as a top Lincoln entertainments venue received a special award and marked its re-opening after the latest Coronavirus lockdown.

There was a great vibe at the New Theatre Royal, Lincoln,  where custodians Natalie and Mike Hayes Cowley were thrilled to receive the Lincoln Civic Award for 2020 – “better late than never.”

It was a special moment all-round because the award, which couldn’t be officially presented last year due to the virus lockdowns, also marked the final official engagement  for the current Mayor of Lincoln Councillor Sue Burke,  – who was accompanied by the Mayor’s Consort Councillor Chris Burke, City Sheriff Jo Rimmer and the Sheriff’s Consort Kraig Needs, along with the Civic Award trustees.

The new Mayor Councillor Jackie Kirk and the incoming civic party are starting their year of office tomorrow. (Tuesday, May 18).

The presentation also came at important time for the theatre because this week marks the re-opening of this popular venue – with live performances of Strictly Cabaret X which can be seen on Fridays May 21, May 28, June 11 and June 18 and on Saturday, June 19 (all at 8pm).

The theatre is now looking to put the Civic Award on show to the public.

Lincoln Civic Award Trustees Chairman Henry Ruddock said: “This award was agreed before the pandemic struck. But only now – fifteen long months later – have we been able to present it.“

“But what an opportunity it has been for recognition, encouragement and optimism.  Viva Theatre Royal!, Viva Lincolnia!”

Natalie and Mike Hayes-Cowley are the drivers behind the New Theatre Royal Lincoln’s regeneration, and they are thrilled to at last be welcoming back theatregoers.

Artistic Director Natalie Hayes-Cowley said: “The whole theatre family is honoured to have been presented with the Lincoln Civic Award. Securing this prestigious accolade is beyond what we thought was possible when we became custodians of the theatre back in 2016.

“To be officially recognised as an organisation which has “brought credit to the City of Lincoln” is simply wonderful.

“Like all our achievements, it is very much a team approach at the theatre.  Without the passion, hard work, long hours put in by all our staff and our amazing front of house volunteers, we wouldn’t be able to create this magical place that the people of Lincoln know and love.”

Managing Director Mike Hayes-Cowley said: “Being a Lincoln Civic Award winner puts the theatre amongst some incredibly successful people and businesses who have really given something extra to the City of Lincoln.

“We are elated to have at last received this award. This recognition for the theatre and the team behind it makes all the hard work worth it.

“We are delighted to have been visited by Lincoln’s outgoing Civic Party and to have had the award presented by the (outgoing) Mayor Councillor Sue Burke just days before we welcome back theatregoers – thanks to the lifting of the Coronavirus restrictions.

"We hope they are going to love our sparkling show Strictly Cabaret X.”

The City of Lincoln Council’s Civic and International Partnerships Manager Kate Fenn said: “We are delighted to congratulate Mike and Natalie on receiving the prestigious Lincoln Civic Award.”