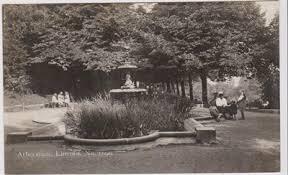 Following the national trend of providing public parks and with the closure of the nearby Temple Gardens, which had operated on a semi-public basis, the Lincoln Commons Act (1870) was passed and Monks Leys Common to the east of the city was purchased by the Corporation through Act of Parliament. Authorisation was also given to sell three acres of the land for residential building purposes to help fund the layout and construction of the Arboretum which would become Lincoln’s first truly public park.

In July 1870, Edward Milner was employed by the Corporation to inspect the new site and to develop a design. Milner was no stranger to Lincoln, and possibly gained this commission through the strength of an earlier piece of work in the city, when he laid out the grounds of the then privately owned Hartsholme Hall in 1862.

Milner’s design was considered by Council and unanimously approved on 13th September 1870. A sum of £500 was handed to the Arboretum Committee by the Treasury and works commenced immediately.

A bandstand was erected on the large lawn in front of the terrace in 1884 and a cast iron shelter constructed by Lockerbie and Wilson was also erected around this time which had rockwork placed around its base.

In 1886 and 1887, additional works including improvements and work to the lake edge, were commissioned by the council. The latter period of the 1880s and the early 1890s consisted mainly of minor works such as the gilding of the bridge, arbour and bandstand. There was also an extremely busy programme of events including brass band concerts, flower shows, fetes and galas. In 1889 over 40,000 people attended the band concerts alone.

In 1894, a Mr Cockburn presented to the Corporation a small area of land lying adjacent to the northwest corner of the Arboretum for the purpose of providing an extension to the original layout.

Henry Earnest Milner, son of the late Edward Milner (and now respected designer in his own right) was asked to develop a design for the site.

Further changes to the landscape took place during this period including alteration to the southern boundary, removal of the maze, removal of the perimeter railings during World War II.

After World War II, in line with the nation-wide trend, the Arboretum fell into a spiral of decline. Corporation minutes reveal that by 1945, the fountains on the terrace were out of service. However, by far the most significant loss occurred in 1948 when Milner’s glass pavilion on the formal terrace was demolished; severe damage to its structure had been sustained from a bomb blast which had destroyed the adjacent Coldbath House.

Later developments included the establishment of Coronation Gardens to celebrate the Coronation of Queen Elizabeth II in 1953, and the fountain basins being planted with shrubs.

In 2003 over £3million was spent by us to restore the Arboretum to its Victorian glory.

Following completion of the restoration work, in 2004 the Arboretum was awarded the Green Flag Award, and has continued to win this prestigious accolade every year since. The Green Flag Award is the national standard for parks and green spaces in England and Wales, and the Arboretum was the first place in Lincolnshire to achieve Green Flag status since the awards scheme began in 1996. Today the Arboretum once again fulfils its original purpose and remains a much loved treasure for the local population of Lincoln.